Home » Toys » Cars » Self Driving Cars Will Change A Lot, Just Not Your Insurance
CarsToys

Self Driving Cars Will Change A Lot, Just Not Your Insurance

Self Driving cars are coming! I am in love with the idea. Don’t get me wrong, I will have a 2 seat convertible roadster with no computers in it anywhere for as long as I can. I will fight any attempt to not let me drive it. There is nothing more exhilarating that flying down the road in a little car that you are in total control over. But sometimes, I don’t want to worry about driving. I want to walk out of the bar shit faced drunk, and tell the car to take me home. I want to read the news on the way to work, I want to check emails while I am stuck in traffic, and I want to watch a movie on those long drives to wherever. The I want to park that car, get in my 1966 Morgan, and have fun.

Will The Self Driving Car Kill The Auto Insurance Industry? 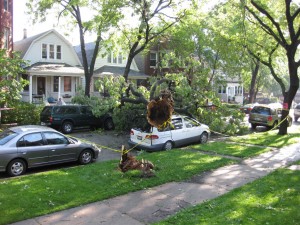 A lot of news agencies have recently been writing stories claiming that the self driving cars will put an end to the auto insurance industry. (like these guys, these guys, and even these guys). This has to be the most ignorant thing I have ever read.

I don’t know how bad of a driver you are, but I haven’t been in an accident that was my fault in over 20 years. I have made zero auto insurance claims due to an accident. I have made a claim when a rock flew up on the road and cracked my windshield. I also made a claim when my car was vandalized. A self driving car wouldn’t have saved me either of those times. A self driving car won’t stop a tree branch falling on your car, or a shopping cart denting your door. They won’t stop flood damage, and they won’t stop that hoodlum from breaking your window to steal your laptop bag. My insurance policy has Comprehensive, Collision, Personal Injury Protection, Liability, and Uninsured Motorist Protection. The only thing I might not need with a self driving car is collision.

What Industries Will Be Affected By Self Driving Cars?

Self Driving Cars will have a serious impact on many industries. Insurance will be a minor impact at best. The industries that should really watch out for self driving cars are:

Sure, people will always need a cab. However, with self driving cars the cab driver looks to be a dying profession. Why pay a driver when the car will come to you, and take you where you need to go by itself?

Currently, long haul trucking is subject to a ton of regulations regarding the drivers. How many hours they can drive, how much sleep they need between shifts, etc etc. As a result, many trucking companies use multiple drivers per rig. Even if you leave a driver for fueling, and delivering, self driving trucks will eliminate a large percentage of driver needed to transport goods across the country.

We all know that police do a lot more then traffic duty, but what percentage of the police force is dedicated to just that? Accident reports and investigations, DUI checkpoints, speed traps… It is safe to say that when self driving cars make up the majority of vehicles on the road, the number of Police Officers dedicated to traffic duty will be greatly reduced, and therefore the number of police officers needed will also be greatly reduced.

As I mentioned before, self driving cars won’t put an end to dents and dings. However they will greatly reduce them. When collisions become a thing of the past, the auto body shop industry will be greatly diminished. This will likely also greatly increase the cost for any body work as their will no longer be a plethora of auto body shops, and the ones that will be left will be “specialists”

Let’s face it, when everyone’s car drives itself, you don’t need to hire a driver anymore.

Another unintended consequence of the arrival of the self driving car is that all these newly unemployed people will not be able to afford a nice new self driving car. The current age of the average car on the road today in America is 11.5 years. At the current rate, if self driving cars become the predominate vehicle in the new car market in the next 10 years, it will still be over 20 years before the average American has one. Until then, you better keep your insurance policy up to date.

Hedging Against Disaster – Cash or Commodities

Classy Jewelry: at a discount