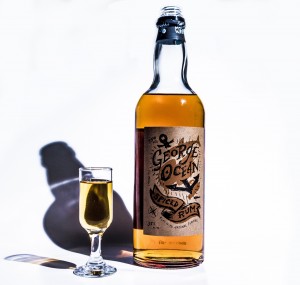 Smooth seas never made a skilled sailor, but smooth spirits helped. So is the tag line of George Ocean Rums. This craft rum, made in the West Indies, comes in a variety of flavors including coconut, white, gold, coffee, and spiced. Today, I am reviewing the spiced rum.

Now, I grew up in Florida, and although I had my Whiskey years when I was younger, I grew out of that (as I hope you have as well). I, instead, grew into the Florida Pirate mentality and switched to rum. (Spiced rum is my personal preference.) Therefore I have more then a few years of Rum drinking experience under my belt, and I consider myself a bit of a Rum aficionado.

In the vain of Earnest Hemingway, I am writing this review drunk, and plan to edit it sober at a later time. This wasn’t my intention. However, after trying a shot, and pouring myself a rum and coke with the George Ocean Spiced Rum, I decided that I should do a direct comparison to my old stand by Captain Morgan, so I had a shot of each back to back (and a second rum and coke). Needless to say, I am buzzed as I write this.

In comparison to the Captain Morgan’s, George Ocean is a bit sweeter with a more noticeable touch of vanilla. As a shot, I don’t think one is any better then the other, however, mixed in the generic “rum and coke”, I think the George Ocean has a significant edge. (This is odd considering I am not a fan of the “vanilla coke” variety of coke a cola products).

As a (former) professional baker, I believe the George Ocean Spiced Rum would also be a good choice for baking (I usually use Sailor Jerry’s for my rum balls because it is sweeter then Captain Morgan’s, but the extra vanilla in the George Ocean may give a unique twist. It is something I may try on my next batch of rum balls, or rum cake). 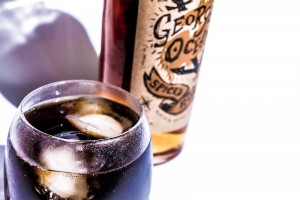 At 70 proof (35% alcohol by volume), George Ocean is equal in strength to Captain Morgan, and after 3 shots and 2 mixed drinks, I am defiantly inebriated as I write this.

If you are a fan of rum and coke, and a lover of vanilla, then this is a good rum for you. If you prefer your spiced rum straight, George Ocean is on par with the more mainstream fair (and gives you the added bonus of being a “craft rum”). If you are not a fan of rum… then I am not sure why you are reading this. Go check out my article on lingerie or something…

I found the George Ocean Spiced Rum in a rather large liquor store that has an entire isle of rum. It was on special, and as so, very competitively priced. It seems some of these smaller batch rums haven’t caught on to the idea that they can charge a premium for being a “craft” liquor . This is much to our advantage. Better booze at discount prices. If you see George Ocean Spiced Rum on the shelves of your local liquor store, and it is on sale, stock up. Yo Ho Ho!

Is Silver Ready to Skyrocket in 2016?

What is an English Blend Pipe Tobacco?